This impressive Alien street art was spotted on a building in East London. I think you'll agree it has amazing detail and showcases the talent of the artists! As an admirer of all things Alien and Robocop too, I thought these remarkable creations were worth sharing here!

Thanks to SCIFIED member **AL** for telling me about this! 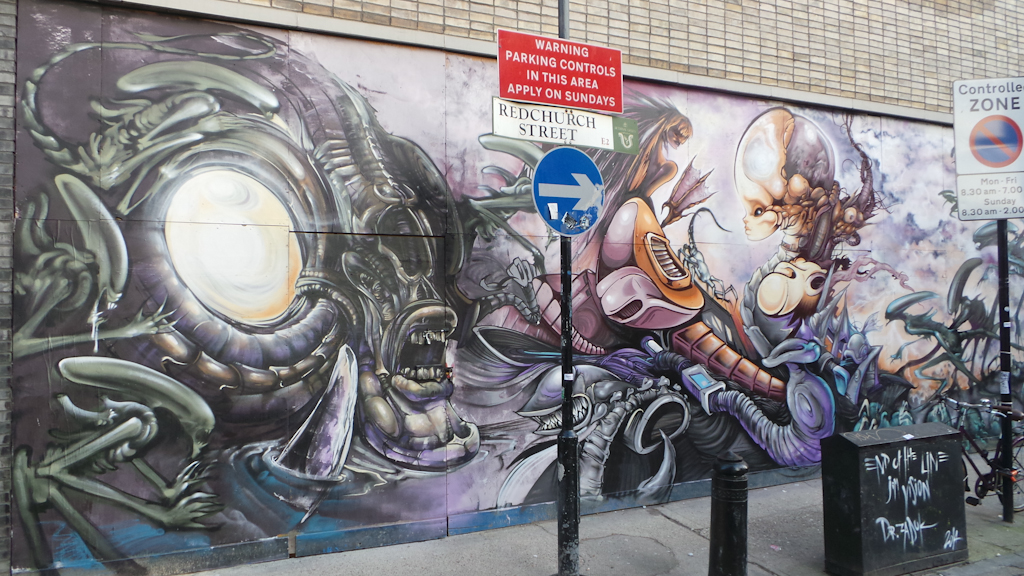 It was created by two End of the Line artists - Dr Zadok and Jim Vision. Using inspiration from the original artwork of H.R Giger and introducing their own take on the work, they filled the massive hoarding with creeping, snarling Alien characters. End of the Line are a contemporary creative collective based in East London pushing new frontiers in large scale mural production and specailizing in Outdoor Murals, Videos, Events, Live & Interactive showcases, festival installations, and much more. Visit EndoftheLine for more pics and details.

Jim Rockwell AKA Vision also completed a four panel Alien mural on Great Eastern Street, as a tribute to the creators of Alien, before the release of Prometheus. I know Jim's Company will never be short of projects and want to wish him all the best for the future.....and thanks for creating such awesome work that everyone can see and enjoy!

"Jim Rockwell is one of the foremost aerosol artists in the UK and a pillar of the graffiti and street art scene. His incredible mural talents have seen him complete commercial projects for globally recognised clients such as Paramount Pictures, 20th Century Fox, Oakley, Sony, Kia, Disney, Capcom, Manga and Becks. The majority of his art, however, is produced for the love of painting on walls or perhaps more accurately a dislike of blank walls." Quote from: The White Canvas Project