Ever since the way Deadpool was mishandled in X-Men: Origins - Wolverine Ryan Reynolds and Deadpool fans have been petitioning for the character to be done justice. A tall measure in itself; to get a big Hollywood studio like 20th Century to listen to a bunch of anonymous nobodys on the internet. Yet after the overwhelmngly positive reception that the leaked test footage of Deadpool recieved Fox could not simply ignore such unprecedented fan support, and along with Ryan Reynolds' constant rallying that the film should be made the impossible has been made possible. In unison the fans shouted and the studio listened, as they have also done recently with Neill Blomkamps Alien concept art. And to say thank you, Reynolds has tweeted his adoration to the fans...

People keep thanking me for getting Deadpool made. I didn't get it made. YOU did. The internet put Fox in a hammerlock death-grip. #sayuncle 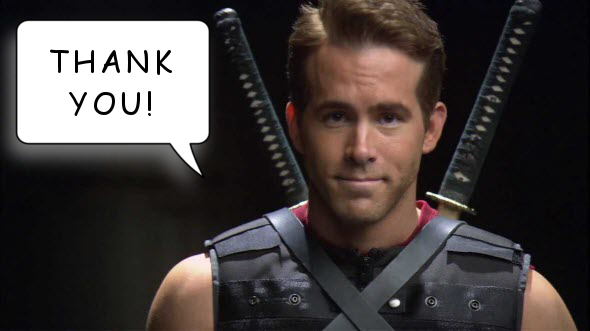