Years ago one of my favorite bands changed their sound into something that didn't resemble anything they were originally known for. After a couple of albums featuring power chords and screaming lyrics they had decided to go a different direction. The new sound predominantly featured electronics and melodic vocals. The result was polarizing. Many fans rejected the new direction. Others praised the risk and versatility.

Change is hard and it often comes with a great deal of resistance. In the case of genre films it can be outright impossible. If Godzilla's Revenge had never been made it's likely that most fans would put Godzilla vs. Megalon at the bottom of the barrel in their "favorites" lists, no question. But outside of the hatred for a talking Minya (Minilla), a lovable Godzilla and an overwhelming amount of stock footage is a basin of great storytelling. I submit the idea that Godzilla's Revenge isn't hated because it's a bad Godzilla movie, but because it's a different one. Godzilla's Revenge is unlike any Godzilla film to come before it. Instead of a straight forward, monster-verses-monster bash, the creatures are a farce imagined by a young boy. There is no imminent threat to Japan. No aliens are invading. The world isn't mobilizing its forces to stop King Ghidorah. It's about reality.

Late 60s-to-70s Japan was a hard place to live in. The idea of two working parents unable to spend time with their children was a very real domestic problem-- one worth addressing onscreen. In the case of Godzilla's Revenge, Ichiro is practically cared for by his financially unsuccessful neighbor, Shinpei. It's a good friendship, but it hardly fills the void of his parents' absence. In place of that void is a love for Godzilla. We don't know if Godzilla is real in this movie or simply a film series. It doesn't matter either. What's important is that Ichiro channels the exact love most of us fans had for this genre when we were introduced to it as children. He envisions spectacular battles and imagines a friendship with Minya to teach him the hard lessons in life-- to stand up for himself. To live strong on his own. 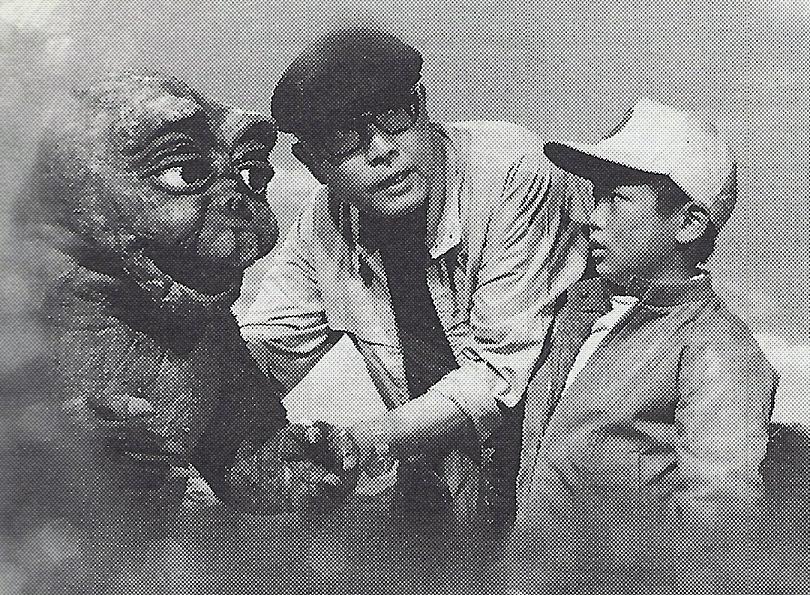 Yet, if Minya and Godzilla are merely his imagination are they really teaching Ichiro anything? This is all coming from his own brain, mind you. The film morphs into an undercover, coming-of-age tale that stings of bittersweetness. Ichiro tells his mother at the end of the film that he'll be fine on his own. As he leaves her at the breakfast table, she sobs uncontrollably. Is she sobbing because of Ichiro's ordeal with the robbers? (A subplot that shows how desperate people were to survive their financial woes of the time.) Was she crying because she felt she had failed as a mother? Or were her tears because Ichiro said he would be fine without her? Was it a realization he had grown up without her help? Perhaps all of the above. It strikes me as one of the more emotional scenes in the entire Godzilla series.

In the end Ichiro learns to stand up for himself through his own trials. He stops imagining Godzilla and Minya as an escape and earns the respect of his peers. His lack of referring to Minya/Godzilla by the film's end might be another example of leaving his childhood behind. With his childhood confidence tossed aside, and his new independence from his mother, he has symbolically entered adulthood. It's a wonderful character arc, perhaps one of the strongest and most complete in the entire Godzilla series. Part of its strength is that it's also quite sad. Outside of his parents, Ichiro may indeed have left behind what many of us fans have not: Godzilla himself. Suddenly he seems like a bigger man, if I may be so bold.

Granted, Godzilla's Revenge isn't without its faults. The reliance on stock footage is a problem that Toho would encourage through the 1970s. The original special effects aren't particularly impressive and one could argue that violence became the ultimate answer for Ichiro after his skirmish with the robbers.

Regardless of the film's technical failings, I maintain that if Godzilla weren't a plot device in this film it would be hailed as one of director Ishiro Honda's greatest stories. Unfortunately, change is hard. When some fans think of Godzilla, they want a story about Godzilla. This isn't remotely a story about Godzilla. It simply uses him as a backdrop for a personal arc; a good one that's typically overlooked for technical failings and a misconception that it should conform to standard franchise rules.